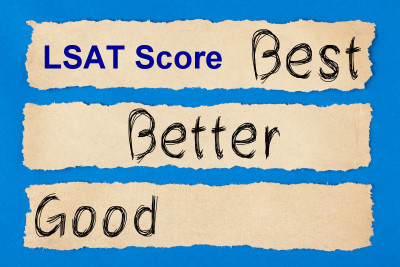 What is a Good LSAT Score?

The LSAT is scored on a scale of 120 to 180 points.  The average LSAT score typically falls around 150. Therefore, at a base level, a good LSAT score should be above the average of 150 points.  In order to understand what makes a score competitive for a specific school, students should know the 25th to 75th percentile LSAT score range along with the median LAT score for specific law schools he or she is interested in applying to.  These numbers will help the student to get a better understanding of what he or she needs to score to be competitive.

While all of a student’s LSAT scores are sent to the schools at which they are applying, some schools take into account all scores, while others simply look at the highest score.  It is important for students to keep this in mind when deciding whether or not to take the LSAT multiple times.  If students are not happy with their score the first time around, it is important they do an ample amount of test prep before attempting to take the exam again.  The LSAT is not an easy test to raise one’s score without an ample amount of preparation.

There are roughly 101 questions on the LSAT.  A student’s raw percentage correct is converted to the LSAT score.  Therefore, getting a question wrong on the LSAT does not directly correlate to a point off of a student’s LSAT score.  Students who hope to gain entrance to a top tier law school should be aiming for a 170, which equates to about 87 questions correct.  Scoring at this level puts students at about the 97-98th percentile, meaning only a few percent of students scored higher.  This gives students a very good shot of getting into a top law school if looking solely at the LSAT.  Students who are aiming for a 160 should try to get 70-80 questions correct on the LSAT which would place them around the 80th percentile. This score is a strong score for those students hoping to go to top 25 law schools.

The amount at which a particular law school relies on the LSAT for admission will vary school to school.  While some schools may rely heavier on undergraduate GPA, these are far and few between.  Most schools rely heavily on the LSAT because it is the great equalizer.  The LSAT is the one standardized exam all students applying to law school must take, and thus, allows law schools to compare academic and logic capabilities evenly between students.  A majority of students who apply to law school have very high GPAs. This makes it difficult to use GPA to distinguish which students have a better chance at succeeding in law school. In addition, with such a wide range of undergraduate schools, some universities may provide more difficult coursework than others.  Or, some students may have chosen a more challenging major than others.  Thus, making undergraduate GPA an inaccurate measure of one student’s ability compared to another student’s ability. Therefore, the LSAT stands the test of the time as the greatest equalizer amongst students applying to law school.  It is for this reason that law schools weight a student’s LSAT score so heavily when deciding which students to admit.

Many students hope to get into top law schools which is why they are willing to work very hard to raise their score a few points to reach a “good score.”  However, as a long and grueling exam, the LSAT is as much a test of mental strength as it is a test of reading comprehension and logic.  For this reason, students considering retaking the exam must decide if it is really worth it.  Or in other words, if they can truly improve their score enough to make a difference in admission likelihood.

A majority of people who re-take the LSAT show a 1 to 2 point improvement.  Unfortunately, this is not enough of an improvement to drastically change one’s chances of being admitted to a certain law school.  If a student’s score is significantly below what is needed to gain entrance into his or her planned law schools, it may be worth taking the LSAT a second time.  In addition, if the student truly feels the score is well below their capabilities shown in realistic practice LSAT exams, it may be worth retaking the test.  We are human, and sometimes, students may have an off test taking day.  However, if a student is not confident he or she can significantly improve his or her score (8 points or more), it is not worth retaking the LSAT.

The LSAT is a beatable exam.  Therefore, whatever score a school considers “good” should be achievable by many students.  The trick comes in the preparation.  Students who have succeeded in their undergraduate careers and who adequately prepare for the LSAT, should have no problem achieving a score that will propel them into the schools they hope to attend.  Students who are unsatisfied with their score and have ample time to focus on their weaknesses should be able to improve their score if they commit to working diligently.

It is important for students to note whether they are taking a disclosed or a non disclosed exam.  Taking a disclosed LSAT will give students the opportunity to understand their strengths and weaknesses.  Disclosed LSATs allow students to understand if their practice exams were indicative of their actual score.  If it shows they were indicative, students can continue to practice until their practice score shows a score they would be satisfied with.  If it turns out the practice exams were not indicative of their actual score, students can take steps to understand where their studying went wrong.  Non disclosed exams can be dangerous because students are unable to see what they did right and wrong, and thus are unable to learn from them.  If students are sure they are only going to take the exam once, taking a non disclosed versus a disclosed exam will not make much of a difference.

Overall, determining what constitutes a “good” LSAT score can be a difficult feat.  There is not just one good score, or not even just one good range of scores.  Ideally, students should aim to score as close to 180 as possible, as a higher score will give them more options when applying to law school.  However, just because a student scores a 160 does not mean they have no chance of getting into the law school of their choosing.  Overall, students should aim for a score based on the median LSAT scores published by the schools to which they are applying.  The average LSAT score lies around 150.  Students who are under this number should think about re-taking the LSAT if they hope to get into a decent school.  However, students who score above this should really take a look at how far off they may be from their dream schools average score to determine whether or not it is worth retaking the LSAT.  With hard work and dedication, students should be able to reach the LSAT score they need to attend the schools they want.